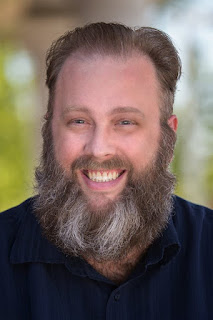 Aaron Lee Yeager is not one of those "Ivory Tower" authors--cold, and distant, with snooty brass buttons, and a pompous red sash, wearing a cape shaped like a fancy degree, and a saber made of pretense. No, he is the kind of author who likes to sit down on a tree stump with the fans and share a good plate of chow after a hard days work, swapping stories and jokes around a good roaring fire.


He came from a family of ballet dancers. In fact, his parents actually met while dancing at Ballet West together. The first few years of his life were spent backstage at productions like CATS, Dreamgirls, and A Chorus Line, where he developed a lifelong aversion to stage makeup. In his youth, he spent two years living in Argentina as a missionary, where he became addicted to mayonnaise and developed a crippling fear of small dogs.

In college, he studied aviation and was well on his way to becoming a commercial airline pilot until he suddenly developed a rare illness that left him with severe heart damage. Bed-ridden for about a year, he began writing, as it was one of the few things he could do.  Regaining his strength he became a stay at home father, continuing to write and attempting to publish one of his many stories.

When his son Stephen tragically passed away in July of 2012, he decided to publish his first novel which was dedicated to his son.

Currently, Aaron resides in Clearfield, Utah with his wife Ruth and their children.  He continues to write books and self-publish.  He also attends comic con writer panels, and in his spare time, experiments in the kitchen.
Home
All content by Aaron Lee Yeager © 2017